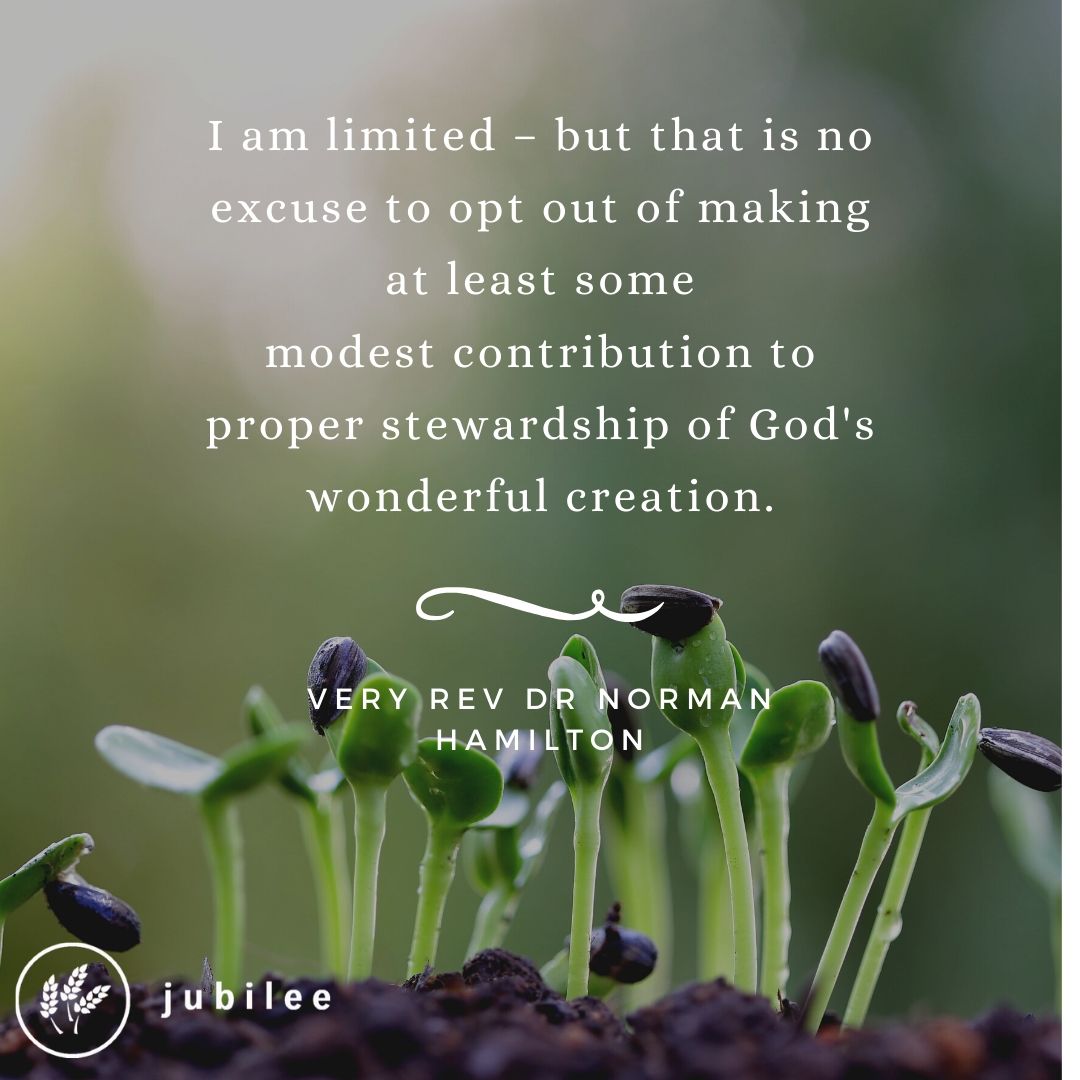 Norman Hamilton shares his thoughts on taking seriously the call to care for God’s creation, being accountable for creation.

David Attenborough; Greta Thunberg; Extinction Rebellion.  Along with other groups and agencies, they are rarely out of the news as they campaign for more action both by government and ordinary people to halt what they see as impending climate disaster.  Not everyone agrees that there is a real climate threat – but few would dare argue that the way we live can and should continue.  Certainly my wife and I are constantly horrified at the amount of plastic waste we generate…. From milk jugs to yoghurt pots;  from cling film to plastic bags;  from disposable food trays to shampoo bottles…plastic is everywhere, so convenient, so wasteful, so polluting and so deadly to so many animals.

Sadly, Christians have been slow to campaign on and address environmental issues, though that has not always been the case.  As far back as the 16th century, Calvin wrote ‘let everyone regard himself as the steward of God in all things he possesses’.  Our reluctance has many sides to it.  One is that we live in a very individualistic and greedy society.  Another is that we are simply slow to connect the way we live and the items we buy with the impact they bring, and which we don’t know or even see.  (For example, after looking at the information on some packaging, I recently asked a major supermarket to explain why they thought it appropriate to import chicken from Thailand which is a mere 6000 miles away.  There was a rationale, but it was more focussed on their business model than anything to do with stewardship.)

Whatever the arguments about climate change, Genesis 2 is quite explicit that as an ordinary Christian, I have a direct responsibility to God for how I steward the resources of his creation that are available to me.  I am to ‘take care’ of them. This means that I am not to be party to abuse, waste or exploitation. Yet I also know that I am a fallen individual living in a fallen human race in a fallen world.  So I am limited – but that is no excuse to opt out of making at least some modest contribution to proper stewardship of God’s wonderful creation.  Everyone’s circumstances are different, and I do not expect others to do the same things that I seek to do.

I have tried to start with some modest changes to buying habits and lifestyle. For example, at the supermarket, Fairtrade coffee, tea and bananas are the only such products that I will buy. Where possible I look for foodstuffs that have very little plastic around them, or  none at all (sometimes with limited success). I usually check the packaging, and will not buy fresh strawberries from the United States or that chicken from Thailand.  I am more than content to buy what have become known as ‘wonky’ vegetables, rather than choose the perfectly formed and beautifully packaged alternatives. And there is a real discipline in learning not to waste food that has been bought. (As a family, we try not to be contributors to the scandal of the one million bananas that are thrown out every single day in the UK.)

Changes to lifestyle are often really quite difficult.  I try to use public transport whenever possible – but the limited investment in that is a real problem for both individuals and wider society. With the encouragement of a ‘step counter’ on a new watch, I am walking a lot more than I used to – and am feeling the benefit of that!

And I will let you in on a secret!  I really quite enjoy browsing in and purchasing from charity shops, for recycling and re-using some of the immense range of goods available is immensely satisfying! (It is also worth saying that many of the volunteers and staff in these shops have a quite extraordinary ministry to people in a wide variety of difficult circumstances.)

David Attenborough, Greta Thunberg, and Extinction Rebellion campaign on a grand scale, with groups such as the Intergovernmental Panel on Climate Change (part of the work of the United Nations) bringing science to the discussions.  They seek to influence governments and big companies to change their policies so that the earth’s atmosphere will not heat up any more.

I am not a campaigner on any of these issues.  I am however, increasingly aware that I cannot be selective as to which parts of the Bible are to be taken seriously.  The call of Genesis to play my part in caring for God’s creation is too strong – and too urgent – for me to ignore.  I am only one person in the 7.5 billion people on the earth, but I am still accountable to God for who I am and what I do.

(Please note that the statements and views expressed in this article are those of the author and do not necessarily represent those of Jubilee Farm.)