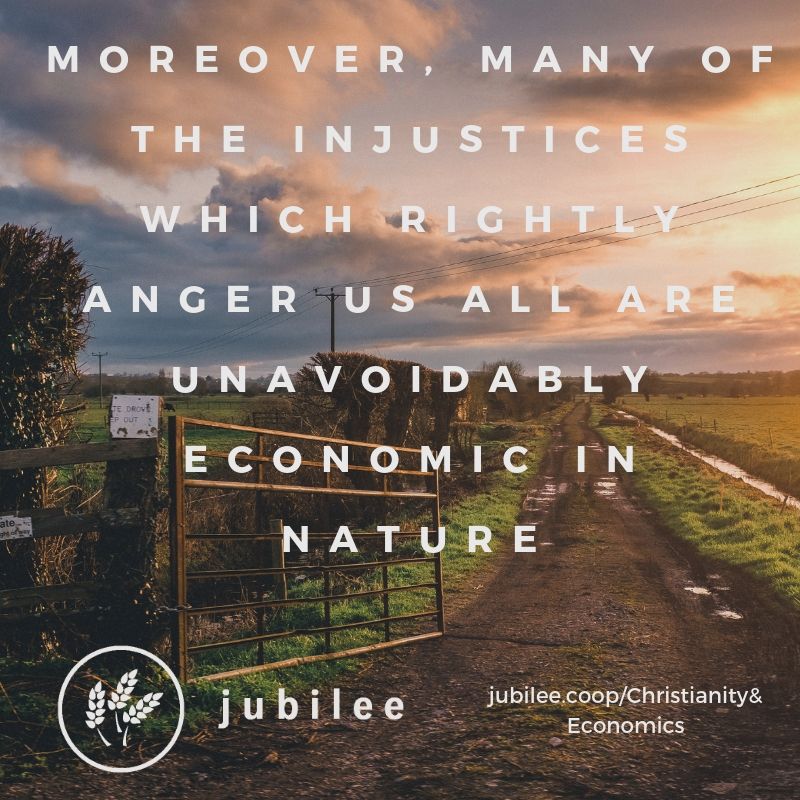 Christianity and economics, the first of a four part series by Jubilee co-founder, director and economist Aaron Hanson, first published by VOX.

The whole of life is about taking something cheap and selling it expensive; that’s how the world works.

Theology and economics are two subjects most Christians would not typically connect with one another. The economy is typically seen as the province of technocrats and businessmen whose ultimate concern is ‘the bottom line’ and ‘hard facts’, and who rule a world where Biblical wisdom would seem out of place – rather like a well-behaved child lecturing their parents on how to manage the family finances.

Yet the Bible has a great deal to say on the subject of economics and how goods and services are produced, distributed, and consumed (a rudimentary definition of ‘economic activity’) and everyone can learn a great deal from what it has to say. From the Creation account itself to Jesus’s parable of the rich fool, all sorts of subjects are covered, such as fair wages, lending, and the treatment of animals. Moreover, many of the injustices which rightly anger us all are unavoidably economic in nature, and if we are outraged by the existence of modern slavery or lavish bankers’ bonuses, how much more should we expect God to care? God, who knows when one sparrow falls to the ground? Whose Son worked as a carpenter and knew what it was to have no place to lay His head?

This is the first of four articles intended to help Christians think about the economy from a Christian perspective, by way of setting out some of the Biblical principles which should inform economic decision-making and applying these principles to key economic challenges. Throughout, we do not seek to establish that God is a capitalist or a communist but instead that He is a radical change-bringer, seeking to transform both individuals’ hearts and societal patterns of behaviour. God’s purpose for economic activity may be encapsulated by the moving words of Jesus: “I have come that they may have life and have it to the full” (John 10:10).

This is a very different view from that of the introductory quotation, which perhaps describes how we, all too often, tend to view life. To think that God only cares about what we do on Sunday – and not how we spend the bulk of our waking hours from Monday to Friday – is to fall into the same trap as the ancient Israelites and the Pharisees, whom the prophets and Jesus chastened for neglecting ‘the weightier matters of the law’ (Matthew 23:23), for praising God with their mouths and not with their deeds (Matthew 15:7-9).

We may split Biblical wisdom concerning the economy into two broad categories: justice and personal priorities. As regards justice, any cursory reader of both Testaments should be familiar with the repeated admonishments to treat others fairly (for example, Zechariah 7:9-10).

Regarding priorities, there is again a whole host of quotations which can be summarised by Jesus’ words: ‘Life is more than food … and clothing’ (Luke 12:23). In other words, as Christians, it is our duty to keep our priorities firmly directed towards those things of eternal significance. This does not mean we should not concern ourselves with the mundane matters of everyday life. Food and clothing are part of life but their role is best conceived of as facilitating or secondary: they are there to contribute to a greater and richer whole, like the humble foundations of a great building. To behave as if man does live by bread alone (Matthew 4:4) – as if life essentially revolves around material ‘stuff’ – is to put the cart before the horse.